A few additions to the Death Guard.

You may remember my squads of 7-strong Death Guard infantry. Fluffy, fun, neat - a great part of this accidental project. Unfortunately, the 9th edition codex made those squads immediately illegal. Now, while 9th edition is basically unplayable due to a) the overwritten rules making it hard to follow the game and b) the constant rules changes making any faint understanding immediately obsolete, I wasn't totally happy with a few aspects of the squads anyway. One lacked an icon, for instance, and I wanted more of the fun equipment that 8/9th has brought to Mortarion's Chosen.

So I painted and converted a few more lads. Now the three squads are ten-strong, which is less flavoursome but there are still three of them - and I can always drop a few members if I ever actually play a game with them.

I demoted one of the officers to be the real slim shady Aspiring Champion-Sergeant Gehazi, making the former champion merely a corporal (albeit still with a sick backpack and the red arm of the Terran-born). I then added a new bolter marine:

And a new icon-bearer:
Gehazi's troops are characterised by paler armour and bronze trimming, as well as each member of the squad having a different backpack to really bring out the sense of chaos, despite retaining the Tactical Arrow as their squad marking. 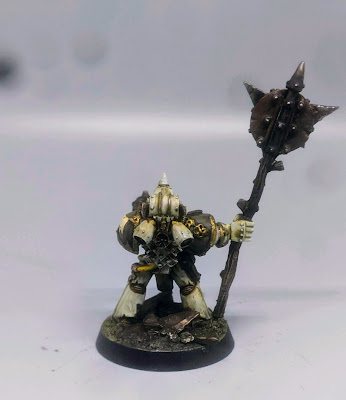 Gehazi's team now consists of a holy seven bolter marines (one with an icon), two plasma rifles, and Gehazi himself has a power fist and bolter. Blah blah non-optimal loadout - who cares, they look good. Plant them on a hill and dare the tyrants' worms to come at them.
Squad Naaman:
Aspiring Champion-Sergeant Naaman's squad already contained a few melee weapons, so we've added three more to his ranks:
The core of this fellow is one of the early-2000s armless plague marine sculpts, with a sculpted-in head. His right arm comes from the modern ghoul kit (which mostly sucks as ghouls but is great for use in conversions); the left arm with the morningstar comes from one of the Kruleboyz Age of Sigmar orks. I just slapped them on and covered them with pauldrons - he looks misshaped but he should. 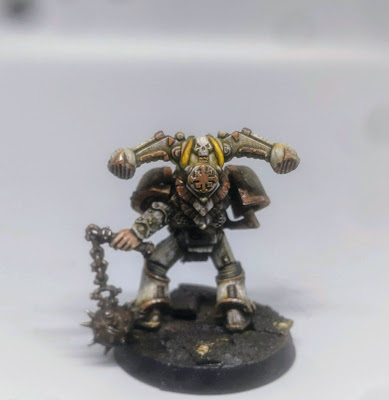 The effect is a lot more pathetic aesthetic than the larger, modern kits, which fits perfectly into the way this army has come together.

Another of the semi-monopose early-2000s kits, you can see here how the modern plastics are larger than the old guard. These arms come straight from a modern kit, giving this marine an ape-like appearance, with his silhouette clearly no longer human. Perfect. 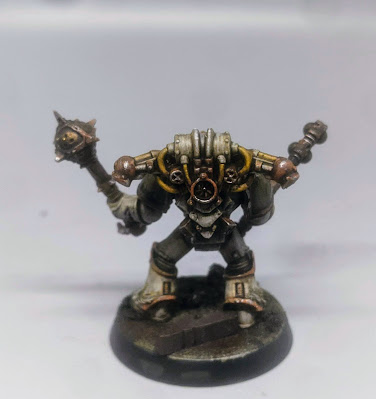 Another late monopose metal, although this one's head is still wearing his Mk VII helmet - possibly a late convert to Mortarion's rebellion. The left arm is stolen from one of the icon-bearers, who now all have bolters (see below). I believe it was originally a Slaanesh-themed arm, but the flayed face works perfectly for someone dedicated to Nurgle. The left arm, melted chainsword fused into flesh, is from one of the old mutation kits, picked up on a bitz site. 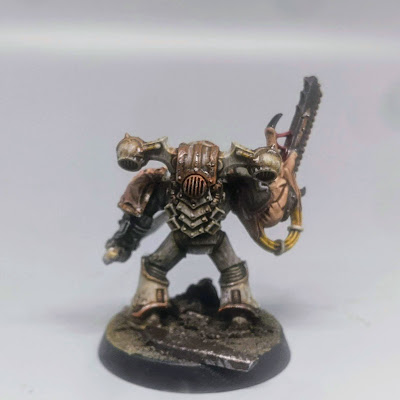 Naaman's brothers-in-damnation now consists of five bolter marines (one with an icon), a marine with twin knifes, one with a plague flail, one with axe + mace, one with axe + knife. Gehazi himself has a bolter and balesword. Again, not exactly an ~optimal loadout but characterful. I plan to make them a Rhino in which they can storm the barricades.
Squad Joab:
Aspiring Champion-Sergeant Joab's squad is a little odd. Two meltaguns already, and Joab has a powerfist, so an anti-tank squad? Ah, excellent, an opportunity to add some weirdo nonsense: 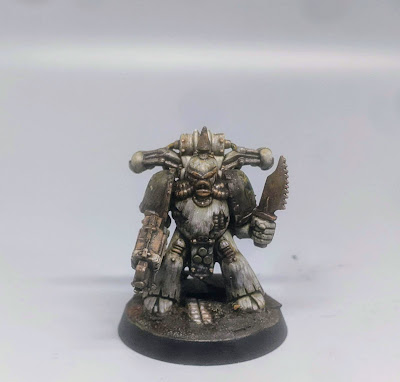 First, a bolter marine to help round out the squad. These are so fun and easy to paint!

Plague Cleavers in 8/9th edition can carve through armour almost as well as traditional power gloves, thunder hammers, chainfists and the like. The actual kit is basically just a big axe, which is fine if a little dull - and it's unclear why a big metal thing would do more damage than powered weapons would. Instead, why not something clearly blessed by the dark powers, something in keeping with Nurgle and Mortarion's other themes? Plus, I have all these scythes lying around from other projects...
Again, this is a metal monopose from the early-2000s. This fellow's gas masked head works well with the implacable reaper look. The scythe's little bony arms are probably too small for the marine's proportions, but for my money this just adds to the withered, pathetic look. Skeletal limbs are among the Realm of Chaos-era blessings of Nurgle, so the whole thing comes together nicely for the kind of imagery I want here. 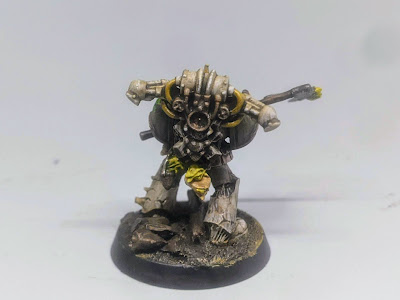 Plus it comes with free skulls wreathed in warpflame.

Okay, yes, all the new additions that aren't icon-bearers or mid-90s plastics are metal monopose, you caught me. This is another who has mostly retained a late-mark helmet.
The left arm is a cut-up spare marine arm, with the parts attaching the shield mostly concealed by it (which is good, because I definitely bodged that together). The shield is self-evidently a classic Chaos Warrior shield I had for some reason. They're great shields for chaos-y stuff (as here) but they also take being scraped down well, if you want a big ol' shield for other purposes. It doesn't count as anything in-game, just contributes to the fallen knight look.
The right arm comes straight from the zombie dragon/terrorgheist kit, an improbably long sword for a vampire lord to swing about. It's absolutely ridiculous and I love it, but I'm going to give the vampire a lance, so this guy gets it instead. The gems are a sickly green, and the black leather glove provides a bit of visual storytelling - the cursed blade itself must harm the wielder, even through ceramite. 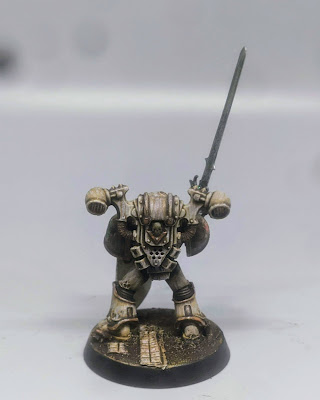 Hopefully between the two of them, it's clear that these are plague cleavers to opponents.
Joab and his fallen brothers now consist of five marines with boltguns (one with icon), two with meltaguns, two with plague cleavers. Joab himself has another bolter and a power fist. As with Naaman, I plan to make a Rhino for them to drive near the enemy, leap out, melt things, and then cut them into tiny glowing chunks.
As I mentioned, I had to make a new icon bearer for Gehazi, but also re-arm the others with boltguns. Each has a different style of bolter, each are painted differently for their three squads. I think this distinguishes them enough despite all clearly being made from the same base sculpt.
That's it for this update to the post-Heresy Death Guard. I have the Rhinos to convert and a third-party demon prince to paint, but all those have been on my desk for a very long time. We'll see. In the meantime, keep bringing death to tyrants, plaguelings!
at December 06, 2022